The most unpredictable and uncertain year of all years, 2020 is winding up and here are 16+ viral memes you can’t ignore! Thank the Lord, the dreadfulness might finally come to an end. ‘Might’ being the keyword here.

The past 11 months have surely taken a toll on our minds; we would go as far as to say that the year has played a nasty, twisted game with our lives and also provided us with an opportunity to come up with great memes ideas and reactions on viral videos.

You know how we came to this conclusion? By looking at all the crazy memes on the internet. If there’s ever a study done on digital archaeology to examine the way 2020 humans used to communicate, the researchers would find the memes and gifs and deduce that the year when the pandemic struck the world, and the concept of time became loose, the humans went all bonkers!

We don’t want to sound reductive. After all, these pop culture references on the World Wide Web have also kept our spirits high by making us go LOL and OMG all year round. Now that the new year is just around the corner, the anticipation is unreal. What’s 2021 going to be like? Will it be better than 2020 or worse?

Here are some hilarious viral memes and top reactions to welcome 2021 to the world: 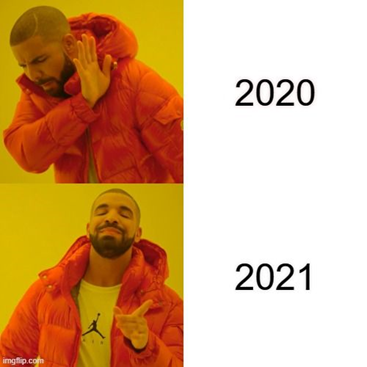 Drake approves/disapproves meme is a classic. The scenes are captured from the Canadian rapper’s hit song, Hotline Bling. It portrays our feelings for 2020 and 2021 perfectly. There have been hundreds of versions of this meme which first started trending in January 2016. 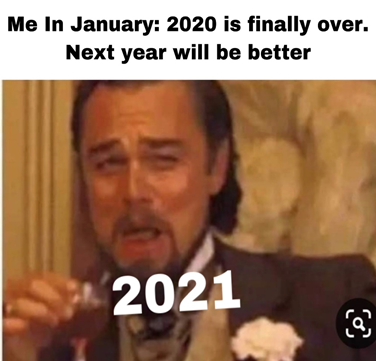 A scene from a 2012 American film, Django Unchained, the meme depicts Leonardo DiCaprio laughing and drinking. This meme has become widely popular and has acquired a life of its own on the World Wide Web. The 2021 version is pretty funny, but oh how we wish this doesn’t come true. Meet Timmy Triangle, Timmy from the Fairly Odd Parents’ alter ego. This lad right here, sitting on a throne of the greens, is mocking our very favourite new years resolution that we’ll start going to the gym. In 2021, we’ll make sure we follow through. The object-labelling dust storm dog is one of the best memes of 2020. It is super cute, but its 2021 version looks so scary. The brown dust storm dog, labelled as 2021, leaves an unsettling feeling in your gut. It was 2018 when photographer Jerry Ferguson took an aerial shot of a dust storm in Arizona. He tweeted it, and we wonder if he had any idea his photograph would turn into a viral meme. 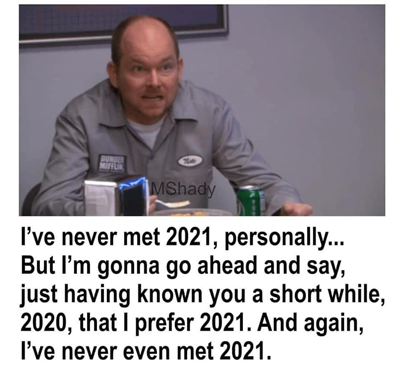 This office guy knows exactly how we all feel. 2020 has left all citizens of the world wishing that the year would just end already. We don’t want to sound pessimistic, but what if 2021 brings stuff to the table that we never thought could happen even in 2020? This meme gives an insight into a possible dystopian future. Oh, who are we kidding? We’re already living in a dystopian world that we used to read about in books. Our concepts of time are already pretty loosened up, but not so much that we wouldn’t appreciate a clever meme like this one. Admit it or not, all of us are going to be this guy if the clock turns 11:60 instead of 12:00 on New Year’s Eve. This clip from an animated movie has gone viral on the internet in different versions. This 2021 version is our favourite. All we hope is that the new year isn’t as scary as the big red-headed lady. How long has it been since you last hung out with your friends? More than 10 months, if you’ve been practicing social distancing diligently. Well, one of the new year’s joke has now turned into reality and @dxxnya on Twitter has done a great job putting it as it is. All the Avengers lovers are going to love this one! This is one of the greatest meme ideas. It is dedicated to hoping that things will get better, just like this Thanos transformation from extremely scary to sweet and amicable.

How cool for this guy, didn’t have to suffer through one of the most terrible years the world has seen! Do you wish this were you? Could this meme be any truer? Raise your hands if this were you all year long. Our hands are definitely up in the air. What’s a better way to glide through difficult times? ROFL! This is one of the top memes that has us in fits of laughter. But just because it’s hilarious doesn’t mean it’s not true. We truly hope our ears can make it to 2021 intact. All the Grey’s fan out there would live this one. What a rollercoaster ride this has been, much like the drama itself. But we’re sure this is going to be the mantra for everyone who survives this crazy time. We know we’re not the only ones who can’t wait for 2020 to be over. And we’re all going to be as thankful as Mr. Frodo looks in this meme.